At this point in my life, I understand two things:
1. I want to live.
2. I never want to be in a Bed, Bath and Beyond trying to find the proper vessel in which to dispose of snot-covered tissue paper while listening to Smashmouth's cover of "I'm A Believer" again.

Therefore, I must change my life.

Until I figure it all out, I have some distractions. 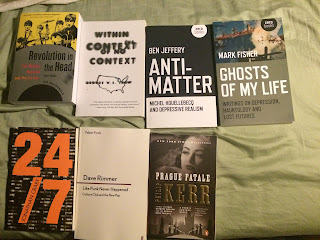 Providence bookstores almost always have something I want to read, but never, ever, what I am actually looking for, so I placed an order with an online behemoth. At this point, I am so disgusted by Amazon's business practices that I actually spent the $10 extra dollars to go with Barnes and Noble, aka the Olsson's killers. Olsson's was the only bookstore I have ever worked for (in the music department, of course), and one of the greatest independent book/record stores to have existed in 20th century America. Yes, Barnes and Noble are now the good guys.

The what and why should be obvious to most readers except, perhaps, for Prague Fatale. I'll never, ever be a good literary critic (or maybe I could be the best one in decades) because I don't care about literary values. I've always read fiction from an almost sociological perspective and what I most value about my favorite novels has a lot more to do with the coherency of the human world described and the way that the beliefs and values of the actors within them approve and sanction actions, both their own and others, in line with or contravening those aforementioned beliefs and principles, has always been much more interesting to me than, I dunno, style, poetic descriptions, psychological "realism", etc. Which is all a roundabout way of saying nothing.

When I don't feel like reading reading, I read hard-boiled fiction. Solitary nocturnal wandering around empty yet cosmopolitan cities, cheap and plentiful whiskey, male loneliness and moral ambiguity: yes. I tend to reread the same novels over and over again, and, actually, that is true for all books when it comes to my habits, so I haven't ventured too far behind the obvious: Hammett, Cain, Chandler. So take the following in context of the preceding: bearing in mind that he is working well within the conventions established by his predecessors, especially, I think, Chandler, Kerr's Bernie Gunther novels are a real delight, and, excluding the relative lack of innovation in comparison, I believe his novels belong in that rarified category of involving detective/crime fiction that doesn't insult the reader and offers real surprises in its smilies.

So yeah, ordering from "an evil corporation", totally worth it. I actually felt a little, well...

I guess what I am trying to figure out

I really haven't read as much post-1968 French theory as I let on. I am a bit of a phony, really.

So, while I intuitively understand that whole collapse of liner/meta-narrative thing, I guess I'm trying to figure out why it happened. Maybe someone has already answered. I have a book by Lyotard lying around somewhere. I'll get to it someday.

My best hypothesis so far.

I mean, the rise of consumerist individualism.

But you knew that one.

Towards. The forwards that provides the past with agency.

And here's where I wonder.

And why did utopia die?

The impossibility of a social subject?

The materialist conception of humanity?

Like, we're all just skin and bones and all. I mean You Only Live Once, but humans live forever?

Is our inability to "fix" the environment symptomatic with a general weariness with life?

Does that weariness come from feeling like there is nothing really to look forward to?

Why is there nothing to look forward to?