A doctor refusing to treat a patient who is unvaccinated and a police office shooting someone who is unarmed are doing the same thing.

What I Write Is Just Part Of All

If this pandemic is teaching me anything, it's just about how to do all the things I can do as opposed to the things I want to do. It's easy and it's not... 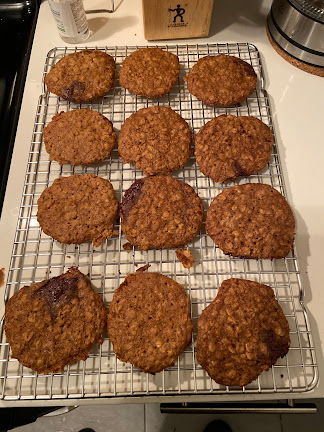 (baked fresh - first time I've made cookies from scratch since [probably] GWB's first term - next time I must cut the chocolate into smaller pieces)
Posted by :-p at 17:49 No comments:

Beyond the self-pity, though, I think there is something worthwhile about the incoherent rantings about: I really do think we are living in some of the most conformist times I have ever experienced.  And I do feel lost between it all, because it's all the same; artists are just real estate agents vying for a different type of real estate.

I would feel self-important but I think what I'm getting at is it's the other way around. I don't get exactly why other people are so enamored of themselves. Not because I can do better, just because better has already been done.

Anyways, though, maybe I'll try and play the game just a little bit in the next year, if only to gain sufficient authority to convince others to stop playing towards building a new game. Or maybe I won't. One way or the other, the near-term goals: love, travel, and a comfortable place to lay my head.

(And yeah, fine, maybe time for a new career, or just some meaningful stability within the one I already have.)

PS Thanks for the birthday wishes. All the best to you and yours!

The problems we face today are the successful realization of the solutions offered to solve them.

I'm being bombarded by ads on Youtube imploring me to donate money to the Democrats.

Even if I wanted to, I can't. I'm still unemployed, and with the expiration of the Federal addition to unemployment benefits, I have no discretionary income. Given that both parties filled their bills meant to to extend Federal aid with additional, obviously-partisan bullshit meant to goad the each party into voting against the proposal of the other party, I can't help but feel that, ultimately, this expiration of Federal benefits was the desired result. As far as I know, neither party is willing to craft a bill that solely pertains to the extension of the previous benefits. I feel more than a little piqued when the people who are deliberately failing to provide assistance to me are now asking for me to provide assistance to them.

Thankfully, I'm nowhere near the point where I will have to start selling off my possessions in order to eat, and if I get to that point, that money will surely go towards a plane ticket to any other country that will have me. If, on the other hand, Senator Schumer, say, has to start selling off his suit collection to finance a case or two of Chef Boyardee beef ravioli to keep himself alive, I do happen to have $0.62 in nickels, dimes and pennies sitting on top of my dresser that he is welcome to have should he really need the money.

But all of this is beside the point. Each of the fundraising ads that I have seen, some with Senator Schumer, others with Stacey Abrams, features a countdown clock and a little graphic in the righthand corner, a blinking box that encloses the words "LIVE NOW". I'm guessing that "live now" isn't some invocation to celebrate life and to not take it for granted, nor is that phrase meant to be a reminder to pursue dreams and to cherish the company of loved ones and to seek the new arrangements that will allow me, or anyone else, to realize our full capacities as human beings. I'm not meant to be increasingly assiduous when I pet cats. Ironically, the "live" of "live now" does not rhyme with "give" (neither in the sense of the word that would be an invocation towards the noblest and best attitude one human could have towards all other beings, nor as an apt summary of the theme of the advertisements in question).

As far as I can tell, the countdown clock has no correlation to anything outside of the world of the advertisements themselves, is tied to no external referent. The clock is rather a callous attempt to instantiate a sense of urgency within the viewer, a sense of urgency that can't possibly survive repeated viewings of these advertisements, which have sometimes appeared twice, even three times, over the course of my watching one video. The clock always starts from the same place, and, I presume, ends at the same place as well. As for "LIVE NOW", am I really meant to think that there are a bevy of Senators sitting around in TV studios waiting for the right moment to break into whatever I am watching to talk directly to me? Or perhaps "LIVE NOW" is some new version of "operators are standing by", some attempt to assuage the anxiety of the clock by letting me know that yes, if I want to give money, there will be someone present to receive said money, as if there is actually some time of day or week or year when the Democratic Party would NOT accept a donation?

If the "live" of "live now" doesn't rhyme with "give', it does rhyme with another word, "jive". Amongst many meanings, "jive" is a synonym for deceitful, worthless.